Jacques of All Trades 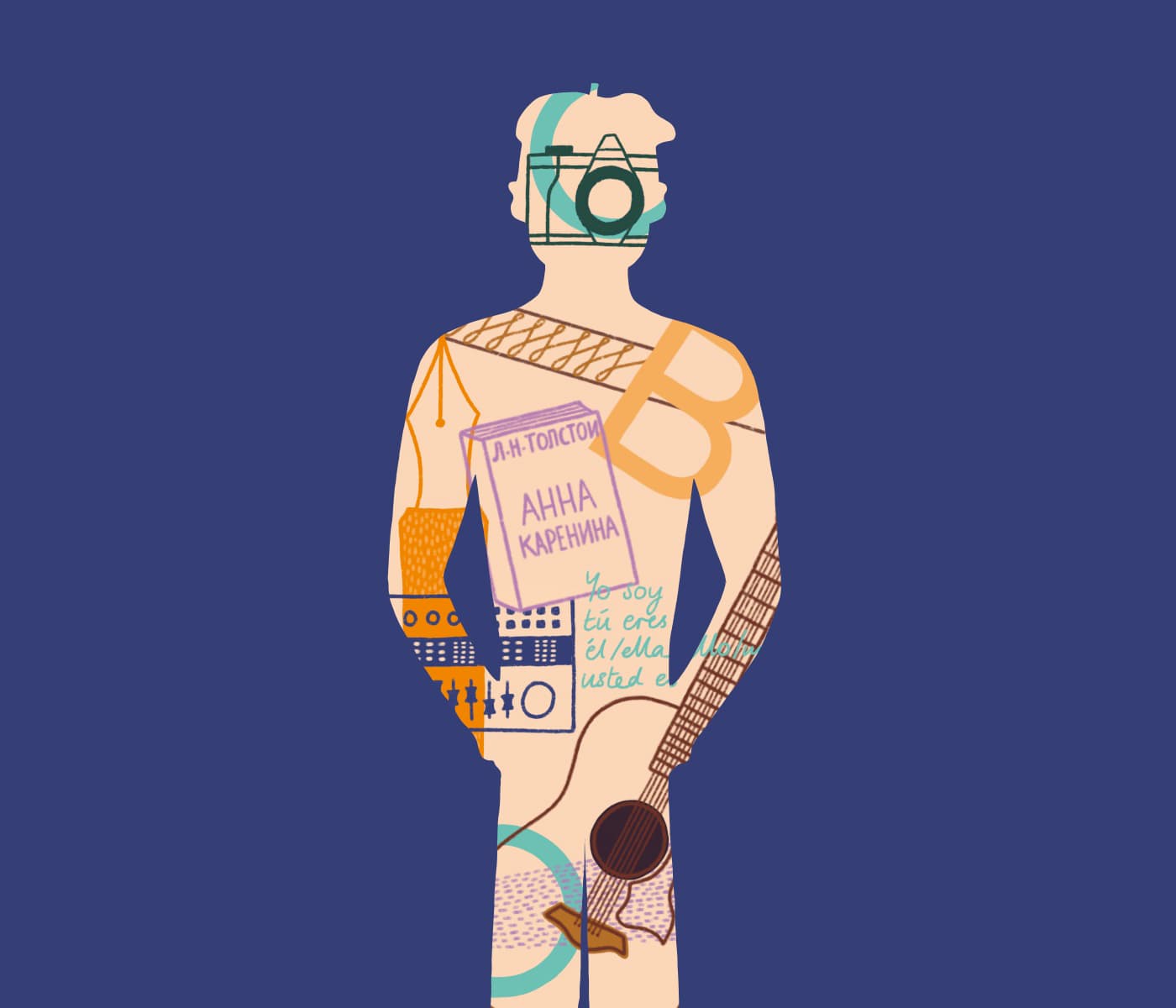 When I tell people I co-founded a tech startup, they often ask what exactly I do and how I was able to start a tech company. I’m a self-taught designer and, knowing that I’m not a developer, they’re often confused as to how I would fit into a startup working with end-to-end encryption and blockchain technology.

There’s a short and a long-ish answer.

The short answer is I design the product from the user experience perspective: the visuals they see, what they can do at a given point, how they can achieve X, or get from A to B, and so on. And after coming to Paris to work for a blockchain startup as their product lead, I left with the founding CEO of that company to start Akord.

Now I’ll give you the long-ish answer.

My career path was been unconventional, unplanned and non-linear. It took me over a decade to really find my feet. In hindsight, I realise it was this meandering, unorthodox path that enabled me to learn a wide range of skills that have all built on each other, helping me get somewhere I would never have imagined possible.

I didn’t study design, I studied philosophy. For many years I would periodically reflect on what a waste that had been — imagine if I had chosen design, how much easier life would have been! But later in my career I found in brand and UX design that the analytical approach to thinking and research I had learnt while studying philosophy had found a professional outlet.

Philosophy also instills a deeply critical way of thinking. Your thinking is trained to never accept anything as self-evident no matter how many people around you take it to be so. This ability to step back and look with fresh eyes is exactly what a designer is often doing. It’s also in the abstract role of problem solver where I’ve found a clear overlap between philosophy and design.

It was sometime after graduating in philosophy until I found my way into design. My first year after graduating I was unemployed and making money by busking on the street. After many years of pursuing music as a hobby, I wanted to take some time to see if it was possible to make a living from it. I was also playing in a band and recording my own music. I would spend the whole day, and sometimes most of the night, writing and recording music, painstakingly programming beats and mixing tracks.

Programming music had given me the patience and mindset to figure out new software and technical skills. Something that became immediately useful in my first ‘proper job’, an internship at an history publisher. I started out in production, where I had to learn how to use a mac, Quark Express and InDesign. I was soon asked to typeset books and gained a thorough understanding of the print process.

I also spent much of that year after graduating reading. I particularly went in for the Russian epics: War and Peace, Anna Karenina, The Brothers Karamazov, Crime and Punishment, The Master and Margarita, We, Dead Souls and Cancer Ward, devoured one after another.

That love of literature helped me land the job in publishing in the first place. I eventually moved into editorial publishing where I learnt copywriting, proofreading and editing skills. Editing 100,000+ word books on the history of the crusades was less of a daunting task having come off my year of consuming the Russian classics.

Those editorial skills have proven to be invaluable throughout my career. As I transitioned from publishing to design, I started freelancing in the evenings. They were just small design jobs for people I knew, but I would often end up helping them edit, proofread or write their copy. That extra editorial service was highly valued and helped me gain some reliable clients, which in turn enabled me to eventually turn to freelancing full-time.

Freelancing full-time also coincide with a move abroad to Spain. I always had the itch to learn a language from zero, and Spain had been in my imagination since studying the Spanish Civil War and reading books by Hemmingway and Orwell on their time there.

Living abroad and learning another language is one of the biggest drivers for creativity and learning I have ever experienced. Every day your senses are assaulted with new experiences. Going to the shop to buy toilet roll is an event. New sounds, new tastes, new smells, new architecture, new directions of traffic, new music, new people, new everything. When you’re living abroad you are in a constant state of learning, your brain is much more plastic and alive, firing new connections as it digests all this new information.

Although my freelance work was going well, I still felt I was behind my peers. I hadn’t studied art or design at college or university. I hadn’t worked at a big design agency, or any design agency for that matter. Living somewhere with a lower cost of living than London enabled me to free up more time to learn various skills I thought would be useful as a designer.

I took up photography and assisted a professional photographer on photoshoots; I designed hundreds of icons to practise creating abstract representations; I taught myself HTML and CSS, finally building a responsive website to sell all the icons; I studied colour theory, grid systems, composition, gestalt principles of perception; and read many books on my favourite design discipline — typography.

I reaped the benefits of all those studies for years afterwards. I freelanced for the British Council who hired me because they needed a Spanish speaking designer for the Guadalajara International Book Fair. I worked as a UX/UI designer for a software consultancy where I had to write my own frontend code. I’ve managed photoshoots while working for a fashion brand, and I’ve been able to do the photography on countless projects where the budget couldn’t cover a professional photographer. The design theory I learnt during that time comes back to me on a practically daily basis. And the icons I designed still make me about $50–100 every month on the nounproject, which is starting to add up considering they’ve been going for nearly 10 years!

At various points I have decided to deep dive into certain disciplines. I had always loved typography and it felt inevitable that at some point I would try my hand at type design. After a particularly well paid freelance job, I decided to take about 2 months off to design my first font, Cephalonia. Cephalonia was featured in a number of design blogs. The experience encouraged me to keep pursuing this avenue, learning calligraphic and lettering techniques through a few evening courses and by teaching myself.

I know for a fact those type projects were the reason my portfolio was picked out for interviews even when the job had nothing to do with type design. They led to freelance jobs working on custom fonts for big design agencies that paid very well. And they also landed me work for an agency in LA working on custom typography and lettering for film posters. When I started working at agencies, I was frequently called on to use these skills on branding projects to bring something special and unique to the identity.

Over the years I started to see how I could leverage myriad skills to get a wide range of jobs, and then provide a more creative service. A learning mindset naturally leads you to seeking out new challenges. It was how I ended up applying to a blockchain startup in Paris — new country, new company, new challenge.

When I joined there was no designer or product team. That meant I got to rebrand the company, redesign the marketing and developer websites, work on the design and copy for marketing materials, help build their product team and lead the design on a B2B traceability product.

I remember the CEO of that startup, who is now my co-founder, telling me how my font design work was the thing that impressed him most. Not my code or digital design experience, but a font! I also remember my interview in Paris where we never even looked at my portfolio. We just talked about philosophy, making music, living abroad, the books we’d read, and more generally about what inspired us.

I believe if you want to achieve success early and quickly, then specialising and becoming the master of one thing is probably the way to go. But from what I have seen, this path is more likely to plateau. A new skill learnt, a new experience lived, while sometimes being a less obvious plot on a linear path of progression, is never time wasted. It will come in useful and open doors, even if you can’t see how in the moment.

I believe while those who go through multiple career changes, or find it hard to settle on one direction, are more likely to feel lost in the beginning of their career; they will increasingly find themselves in positions where their unique and varied backgrounds help them in higher-order thinking and problem solving, delivering more value to the companies they work at or start themselves.