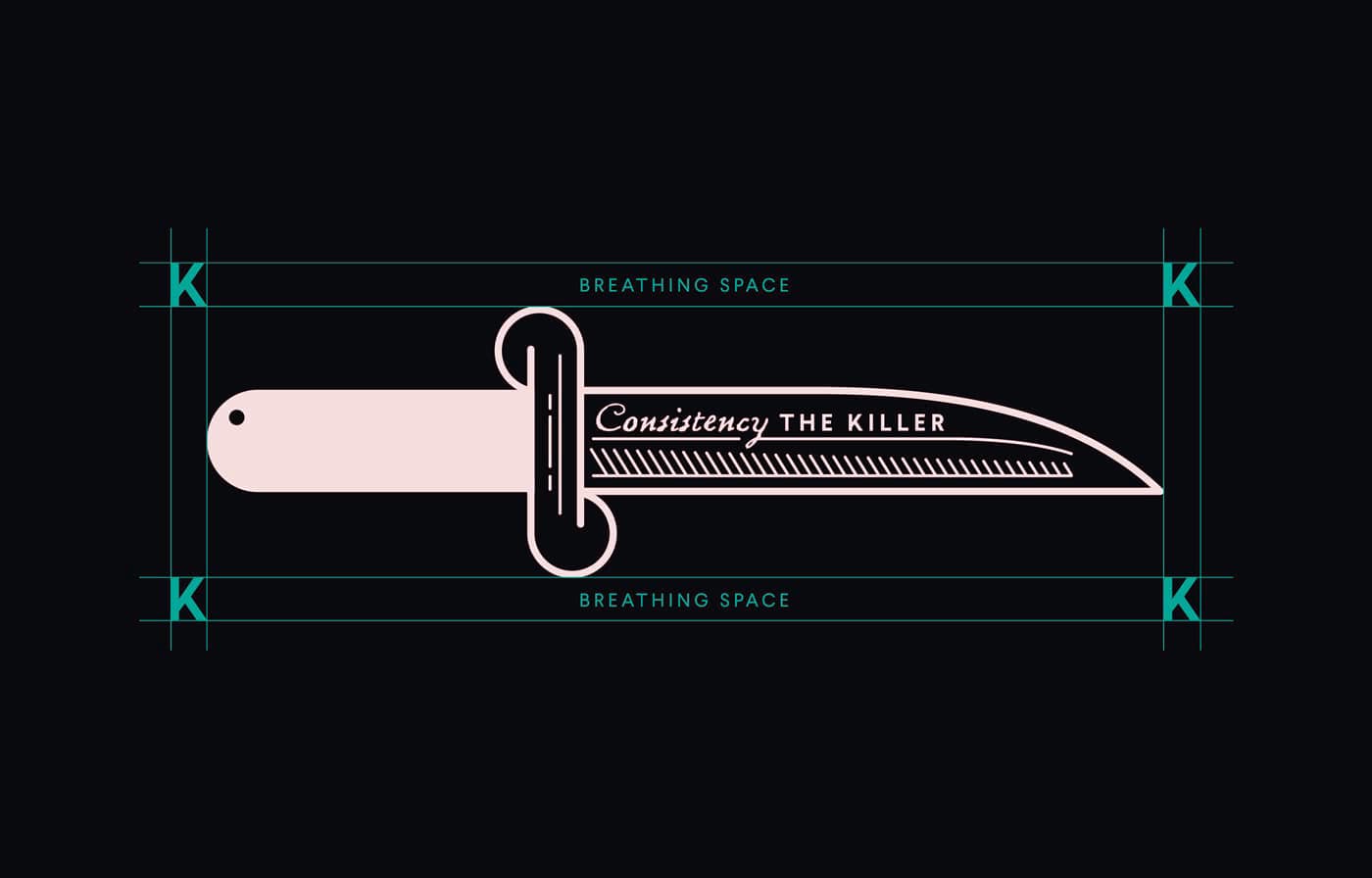 I used to be all about consistency. I was obsessed with Bauhaus design. I read about the great 60s corporate identity designers like Rand and Vignelli, I studied their meticulous design manuals, and I wanted my work to be just like theirs. Logical. Minimal. Clean. And, yes, consistent. So very, very consistent.

Consistency was the killer attribute of design, I thought. But now when I think about consistency it appears to me more like the killer of creativity. The killer of experimentation, of exploration. The master of killing conversations, ideas and possibilities.

Most people don’t question consistency. Consistency is good, obviously. From a consistent paste to consistent logic, it illustrates care, attention to detail quality. When it comes to designing a UI, for example, it’s a highly valued attribute. We don’t want to lose or confuse the user in randomness. So what are we doing here? Why are we questioning consistency?

If there’s an idea, belief or principle that is pushed, or appears, as obvious and is never questioned, then it’s usually time to not only question it, but to argue against it.

Even if you’re a firm believer, certain your faith won’t waver, the exercise is always worthwhile. You may well come to the conclusion that, yes, this is still right. But the process keeps your mind alert and aware to the false assumptions we sometimes hold.

If you’re a designer, or someone who works closely with design professionals, and you’ve taken it for granted that consistency is always a good thing, then join me on a quick jaunt to question whether this assumption is as valid as you originally thought.

As I’ve progressed through my career one of the most common critiques I hear is that something is not consistent. When someone points to an inconsistency and everyone sees that to be true, it’s like the checkmate of any debate.

Well, if it’s not consistent it must be wrong.

Many people work with design while not being designers. This can be tricky territory. Sometimes knowing a little can be worse than knowing nothing. The first (and often only) design rule someone outside of the profession will learn is usually the consistency rule. It’s simple to grasp. Quick to flag. You’re in a meeting and feeling uncomfortable with your lack of input, then suddenly you’ve spotted an inconsistency — bingo! The room nods in appreciation for your keen eyes, and you see a clear path through which you can demonstrate your added value. Henceforth, you’re on the lookout: inconsistencies = BAD!

As a minor nuisance, the consistency call out is like the professional equivalent of the person who’s ignoring what’s being said while obsessively hunting for any typos. At it’s worse, constantly citing this principle encourages a mentality that can’t see the bigger picture. A mentality that produces work that is conservative, same-y and borish.

Over the course of my career I have seen the consistency card shut down countless creative and valid avenues for exploration. Like a king holding court, a hierarchical dynamic is established. First, everything must be consistent. Then we can talk.

Off with his head! I say. It’s time for a revolution.

The world of identity design was once the ultimate purveyor of King Consistency. Now, it’s the space where you will find the strongest backlash against this stale way of thinking.

Designers in this field are understanding that the most effective brands are not static tools used to inform in a one-way interaction. But something that is living, breathing, communicating, evolving. Just like the people they’re ‘talking’ to. As Mattt Steel says in the article, Why a Coherent Brand Identity is Stronger Than a Consistent Logo:

Your followers don’t give a rusty nickel if your color palette is treated consistently, or if your symbol appears above or to the left of your name. What matters to them is how well you inform, inspire, and empower them.

Brands have followers now. And no one is interested in following someone, or something, that never changes, that never surprises.

OK, OK, I hear you say, but what about the logo? Surely that’s the one branding element that must be applied consistently?

Some bold companies are embracing a new approach where their identity does not have one set logo. One of my favourite examples of this was the early branding for the Byron chain of restaurants. There was a ‘no logo’ approach with signage stylised to work with the unique interiors of each restaurant. Between restaurants, wildly varying typography and illustration was used on menus and throughout the various touch points. Despite the complete lack of consistency, each restaurant felt unmistakably Byron.

Another great example is the work done by design agency SomeOne for FastJet, an African Airline. The brand uses what could be described as a mascot, an African grey parrot, that is illustrated in any number of ways depending on the context it’s set within. There is no one version, no one lock-up with clearly defined (and ironic) breathing space, which is used to rubber stamp every piece of brand collateral.

I will admit, consistency is one ingredient in design that is often sought and usually results from good work. But be wary of being ruled by unquestioned laws reasoned in the abstract. Your context is always where you should refer to first and foremost.

Abandoning a blind faith in consistency will open you up to focus on every part of your design process; to focus on what is the most relevant solution. Just because this element appears in a certain position on all the previous pages, doesn’t mean it should appear in the same position on the next. Maybe that no longer makes sense on this page.

In his short article, Coherent, Not Consistent, Bruno Bergher highlights how designers lose themselves under the banner of consistency, buried in the details of a project, failing to see larger product design issues, and losing valuable time that could have been spent validating core features.

Too often I see teams spending days arguing about how they’re spacing elements differently between Android and iOS… Stressing whether the tip of a tooltip is should be at 30- or 35- degree angle. All these while letting core interaction problems in their products go unchecked.

Another related issue is that designers (and people working with designers) will think about consistency in terms of what has always been. They ask themselves, What are the consistent UX patterns established on the web? What are users used to? The problem is this leads you away from thinking about the people you’re designing for, the product you’re working on — your specific context. Thinking about consistency in this way results in lazy, generic design solutions.

Current knowledge, on the other hand, requires in-depth knowledge of the users. And that takes research time and investigative effort. It doesn’t come cheap, like consistency does. But it produces much, much better results.

Design, like many disciplines, seems like it is constantly in the throes of pursuing productivity at all costs. Everything needs to happen fast. Even failing. Coherence is a lot more subjective than consistency. It takes a little more thinking about. You may need to take a time out, and embrace the grey area of a project to figure out your context and what is coherent.

I see coherence as a more progressive way to frame design decisions. Coherence is about how well something is understood. Everything should make sense, everything should hang together nicely in a coherent design. A consistent design may not achieve any of those things. The border radius on every button will be the same, but the website may still be a confusing mess.

Start with coherence, get that right. It’s much harder to tune the macro. We may be more comfortable with our noses pressed up into the details of a design, but leave that stuff until you’re sure your design is coherent to the people who will use it.

Recently I’ve been thinking of consistency beyond design. I think about the supermarkets’ obsession with consistent looking fruit and vegetables. The idea that we should arrive and leave work at consistent times. The pressure to show a consistent face to the world. And I wonder, where’s the benefit to all this consistency?

There’s something rooted within our culture that pushes us to demonstrate consistency in our thinking and in our work. That signifier of quality, that something that has been well thought out. But consistency in many things in life, especially in creative work, engenders waste, gives the false illusion of progress, and strips the humanity from the end result.

When we think of hand-made objects versus machine made, we see consistency versus coherence in a compelling light. Machine-made objects are identical, they’re this way as a product of a manufacturing technique that seeks the most cost-effective means. And as such their emotional value (which has a truer meaning than a price tag) is diminished. Hand-made objects are always unique, in small ways, while still being identified as a coherent collection. Their value comes from the slower, unpredictable nature of how they’re manufactured. They feel special. So we hold on to them for as long as possible, handing them down through generations.

If we want to give our designs longevity, then we need to adopt a ‘hand-made’ mindset. If we’re to design something special, then let’s craft each page, part, section; considering its context, while making it coherent with the whole. And inevitably small details, kinks and quirks, will emerge that make sense in the bigger picture, but render those parts interesting, beautiful and singular.